The Board
The Member Companies
Assolombarda and Confindustria
Background
Booklet Economia
Booklet Italy, Lombardy and Milan
Investing in the territory
Invest in Milano

Industrial and Employers' Organizations in Italy: a Background

The birth of industrial and employers’ organisations is closely related to the unprecedented phenomenon of economic growth in the Modern era. By the end of the 19th century in Italy, as well as in other countries, several lobbies had already taken shape, aiming to promote employers’ interests.

The earliest sectorial associations were founded in Milan, the city leading Italy’s economic and industrial transformation between the late 19th and the early 20th century. The Consorzio Lombardo degli Industriali Metallurgici e Meccanici (Lombardy Consortium of Metallurgical and Mechanical Manufacturers) was established in 1899 to deal with industrial relations issues. 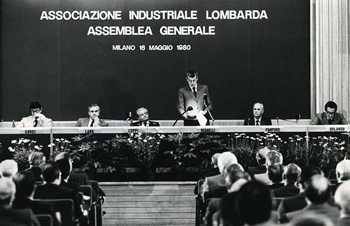 In 1919, manufacturers in Milan agreed to define a common line of conduct, as strikes and social strife were taking the form of an organised political struggle. Federazione Industriale Lombarda (Lombardy Industrial Federation) was established, and the lobbies representing the interests of several industrial sectors soon joined the new organisation.

During Fascism, promulgation of the so-called “Corporative Laws” altered the Federation’s structure, as the organisation became a branch of the Ministry of Corporations.

After the end of World War Two, the National Liberation Committee entrusted entrepreneur Giovanni Falck with the Federation’s reorganization: on June 25th, in 1945, the Associazione Industriale Lombarda, better known as Assolombarda, was established.